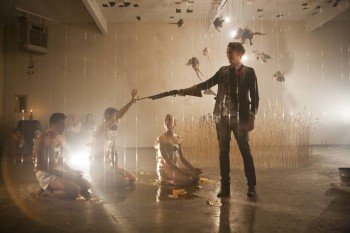 3. Death
Setting the conversation’s mood, Mitchell talks about decline, about the US as a dying empire. Decay can be seen as a phase of a specific variant of strength through focus, in which time seemingly slows down, enabling a gaze towards past action’s consequences.

A lot of thought usually goes into pre-death postmortem brooding — some of us spend their entire lives that way: when the mind can still be used to ponder its circumstances.

Once this state becomes the truly fatal, the mind, now stuck, results in brooding gradually getting replaced by vertigo, a kind of horror defying verbalization. When previously there was a force against which to lean, a force ‘demanding’ countermovement, the former’s sudden absence creates the well-known, unsettling surge of total imbalance: the countermovement becomes the stage’s sole force, like vacuum in open space.

Derrick Ryan Claude Mitchell mentions his disinterest in catharsis, the process of purification through art — his work is no ritualistic rebirth convenience. But without interest in cathartic birth-through-death renewals, can there be anything left to ever be noticed? The implied apathy’s lack of interest seems mind boggling.
Would the work benefit from being understood as documentary force instead — passionate about the process, yet dispassionate about the focused subject? Apparently not: Mitchell talks about not making art that has function; about creating art neither educational nor entertaining, yet still having merit. He talks about the urge to create certain feelings, to conceive of something acting as enabler of thoughts.


Certainty of impending aggravation creates situations whose conditions’ analyses are abhorrent, because of the subconsciously rising knowledge filling every dent and wrinkle; again: like vacuum. By approaching these matters transmedially, Mitchell transforms every possible agenda or pretense — society, history, politics — into tools towards his own Gesamtkunstwerk. Part of the dynamic created this way is the highlighting of the optional, voluntary aspect inherent to all of them.

Mitchell talks about taking nine months to retrain the way he walks, in order to walk in a way not native to him. It requires a work ethos that skips the distance between practice and ordinary life: where life becomes practice. What does it mean? What does it mean to retrain walking, where’s the critical distance? What can you know or rely on when the artist is the art, and their medium seems life? Are we witnessing one more person objectifying themselves in an effort to become (part of) their oeuvre? Where’s the distance — and where’s the madness.

2. Mocking Birth: Dynamics of Elevation
Mitchell’s work is uncanny because it transforms the things dearest to us, creating an unusual fog of enlightenment. Elevation through diminishment. Freud’s dream dynamics of condensation and displacement. The work mocks essential attributes of life, challenging the ontologies we live by — the unseen pillars of our existences. Mocking as a tool of belittlement inherently acknowledges and manifests that which, in the mocker’s opinion, isn’t small at all: feelings, faiths, truths etc. We usually mock what we couldn’t otherwise handle: What is meant when mocking existence itself?

Mitchell’s work elaborates, highlights and questions what we might not think about — the unconscious, the collectively unthought known. It shows dynamics whose elusive character can make them too volatile for analysis — maybe because of our lack of sensitivity regarding the uncanny. It takes its strength from the fact that although existential, Mitchell cares — hypersensitively so. He’s a storyteller that doesn’t want participants (contemporary art’s conditio sine qua non) but witnesses, a reflection on society’s need for the spectacular as its economy of attention’s most valuable currency.

His post-medial approach thus is as much efficient as it feels necessary — a jester acting as Lacan’s stade du miroir, for us jubilating witnesses to finally enjoy recognizing ourselves in the mirror he constitutes. What can be seen therein is as much disgusting as it is beautiful, the ultimate poetic abundance, an abominational reverence to a truth we create, while at the same time rejectingly negating it; a truth too strong to ever fully be grasped or taken seriously by those it affects.

So much Reno to be experienced in this world. Reno, as Mitchell explains, the place where dreams go to die. The place, coincidentally, where he was born — a place of rebirth, then? Of catharsis?

Do nightmares die too?

1. Spiraling frequencies
Mitchell constantly reflects his audience, the work’s surroundings, and the various states of cultural canonization. Saint Genet, his company, acts as ever expanding appropriative environment, as a kind of societal seismometer. By creating a variety of satellite manifestos, it essentially samples all there has been, or could ever be — smaller intermezzi of short-term binge-performances, as well as its trademark large scale works. Independent of scale and scope, the group’s pieces are added to its canon, ready to be used henceforth. They operate in analog, human and humane versions of the post-democratic algorithms modelling our lives, with their vector being the intellect, the mind, the psyche: Theirs is the domain of poiesis, not nostalgia. Theirs is an ambiguous, post-dichotomic model of thought, where walking is a mode of reflection, not one of transit.

They appear to stretch time by intellectually and emotionally focusing in while zooming out, creating a vertigo effect beyond Hitchcock’s retinal focus — instead applying a sort of fractalian approach to life, repeatably focusing all of its potentials both sequentially and in parallel. The resulting mental moiré is source of the work’s perceived dizziness, emerging from its many intersecting semantic layers. 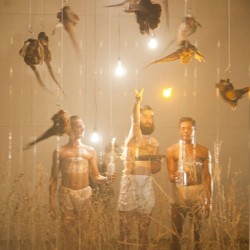 I understand Saint Genet’s efforts to be of the scale of those artists living their lives (and thus understanding their work) not as sequence of absolutions or finishedness, but as pieces towards unreachable goals — and sometimes ending up creating, strengthening their goals’ unreachabilities. As vectorial process having no more than direction; as moebian, spiraling attempts showing facets of what is or could be, without locking in to what’s already become past anyway. Things too volatile to focus.

It’s this spiraling, fractalian binge-thinking that attracts me, the kind of thinking that happens before the curtain is pulled back. The prismatic way of dilutingly amplifying what could be or become an essence: not ‘the’, but ‘another’: an essence.

What differs Saint Genet’s, and specifically Derrick Ryan Claude Mitchell’s from other artists’ work, is the company’s trans-, and potentially post-medial approach to appropriation: sampling without anyone being able to witness a conscious act. More than that, the spectators become witnesses to a concrete and direct poetic application based on the company’s crowdsourced knowledge about the world’s everchanging cultural canon — the kind that could make intramedial artists shudder: Like any unknown enterprise encountered the first time, realizing width and breadth of scope (regarding its ciphers, language, and general modes of processing life) seems endless, and endlessly unexpected. In the case of Mitchell’s Saint Genet, it also feels authentic, and thus true — even in case of untruth. Permuting these elements in an ambiguous way that nevertheless feels nonambiguitive and emotionally binding is part of their work’s strength.

0. Life’s Abundance
Saint Genet use exhaustion as tool to reflect contemporariness. They utilize modes of deception, perfection and control, instituting a system to train and recondition their bodies beyond rehearsal — in life. In a way, they don’t seem to rehearse at all, instead applying an inclusive approach to their lives and habits, their habitats. Inversely, their lives could be understood as individual rehearsal stages — for within time, their bodies’ memories will reset, independent of conscious actions. Fostering this state of instinctual power leads to consciousness that’s active even when drugged or in excess. Reconditioned actors usually feel like Hollywood marketing, urging the audience to believe in facts not usually achieved by hiring actors — which probably is one of Mitchell’s reasons to talk about instituting a level of trust, about the undistance between actor and act, about the training becoming the act. He mentions understanding a work’s preparations as an act of kindness, highlighting the deep bond between certain of Saint Genet’s participating individuals.

Their work’s most important aspect seems their inclination to live up to the necessity of creating an avant-garde environment that requires its own terms and language, its own instincts of trust. For this they facilitate a hub of confidence, an emotional infrastructure to exponentiate their potentials.

It might be for these reasons that Mitchell’s work makes me believe in humans, in humanity, creating a presence that seems the essence of life’s potentiality: to hope, and to trust. The only thing interesting is that what is not catharsis, Mitchell’s initial statement, could be the company’s Leitmotif: working in an empire of oblivion, within the post-medial orbit of a theater understood to be obsessed with death and rebirth — a medium of hope, then, of resurrectional hope, struggling to process its decline?
Reno.

Thanks to Patrizia Ruthensteiner for making me aware of Derrick Ryan Claude Mitchell, and insisting on contacting him.