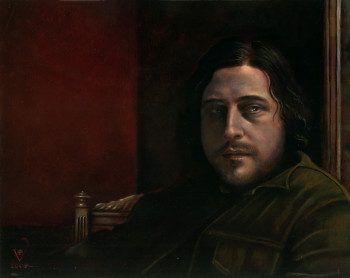 Q: How long have you been an artist? Please tell us a little about your chosen medium.

A: I’ve been composing images for as long as memory serves. I have distinct recollections of drawing for hours as a child._____

The crayon box was eventually supplanted by the painters kit, and for many years I traveled with only a sketchbook and ink pens to capture my visions, but I’ve worked in one media or another for my entire life.

Q: Have you been trained, and if so from what institution? Or are you self taught?

A: I have not attended any formal art schools or institutions, though I certainly would not describe myself as self taught, as many teachers and guides have assisted me along the journey. My gracious parents had the foresight to provide me with instruction from several local artists when I was a youth, and so I learned the fundamentals of color, form, and composition during my developmental years. My commitment to the craft of painting was sealed in my late 20s, when I studied the Misch technique of combining egg tempera and oil pigments with Philip Rubenov Jacobson in Austria. Jacobson is a devoted painter teacher, the principal student of the late, great Magical Realist, Ernst Fuchs. Jacobson keeps the essence of the Misch technique alive though his reverent instruction and compassionate encouragement.

This renaissance inspired method of painting is unrivaled in its ability to bridge atmospheric nuance with meticulous structural rendering. It’s an alchemical marriage of opposites in a very literal sense, oil and water being employed in equal measure to slowly build up layers of illusory depth and color. A monochrome tempera underpainting provides the foundation on which oil glazes are applied, evoking unrivaled effects of light and shadow. The process typically requires some months to bring a single panel to completion, and appeals to my essentially architectural approach to painting, wherein a work is built from a carefully planned concept, anchored with a strong structural foundation, and ultimately embellished with meticulously rendered details.

Its also important to acknowledge the influence of one’s peers; those creative individuals who vigilantly tend to the creative flames, and who offer their unique visions to the world. Longtime friends and colleagues, Madeline von Foerster and David D’Andrea have always motivated and inspired, and I have been privileged to watch their creative careers develop & blossom over the past few decades. We all came out of the same underground cultural context in the early 1990’s, and share similar aesthetic values, being inspired by the natural world, art history, and the craft of obsessive rendering.

A: Inspiration is a direct synthesis of my subjective & empirical impressions – primarily irrational – as filtered through my more cognitive understanding of art history. I tend to study particular eras of painting from both a historical and an artistic perspective, learning as much as I can about the time in which they were created, as well as studying the images for their own visual merits. There is no one era that I necessarily elevate above the others, but I have been especially influenced by a thread that can be followed from the Classical period in the ancient world, through the early Renaissance, and into the Romantic era in northern Europe.

I have been particularly compelled by the Nazarene movement, a collective of german painters in the 19th century who embraced late medieval aesthetics in their working techniques and practices. Their principle ambition was to integrate image-craft with a philosophy of creative devotion. These values can further be observed in the Pre-Raphaelites of England, and then later in the Arts & Crafts movement which spread throughout the United States. The consistent theme is one of craftsmanship, and aesthetic harmony that harkens back to a pre-industrial epoch.

Q: Was your family supportive of your artistic endeavors? Is there someone special who has encouraged your work and your path as an artist?

A: My father deserves special credit here. His uncompromising philosophy of embracing creative passion for its’ own sake has been rivaled by none, and consequently spurred me on to pursue my vision, however seemingly irrational. Perhaps reckless in practice, but ultimately invaluable for coming to understand the true potential of the creative spirit. I am likewise motivated by my sister Rose Vierling, a professional dancer, whose strict discipline and steadfast ambitions always reminds me to persevere in the face of adversity, to remain calm and resolute in endeavoring to ascend to the heights. I am further very fortunate to have a number of inspiring peers, fellow artists and creative people too numerous to mention here, who all contribute to a sense of shared cultural significance.

Q: What are your hopes and dreams or future goals?

A: My personal and artistic goals are essentially extensions of one another; to live in a balanced state of creative inspiration and sustainable productivity. Mundane reality tends to make tempering this process difficult, but harmonizing disparate obligations is the key. From this foundation comes more specific ambitions, such as the desire to see my work collected by fine arts institutions, and to collaborate on more large scaled publishing projects. The ultimate goal is to contribute in some small way to the vast cultural legacy that has so inspired me to produce my own works. The dream is to sew seeds that will bear fruit for future generations.

I have already been very fortunate to have received many remarkable and engaging commissions, and I am grateful for having had the opportunity to actualize so many portraits, album covers, and book illustrations through generous patronage. By way of example, for many years I visualized creating a Vierling Herbal, wherein I might contribute to the vast legacy of botanical illustration. This dream was actualized when I was approached by the legendary Three Hands Press to produce content for an entire tome dedicated to the plant kingdom. The book is being written by Daniel Schulke, and concerns the spiritual and magical properties of plants. The images themselves are very much informed by an extensive tradition of botanical illustration, an endeavor that has necessitated a tremendous amount of research on my part. It has been imperative that I not only familiarize myself with the physical attributes of the individual plant species, but also with the various visual interpretations that have come before. The goal is to elaborate on this rich tradition of illustration in a unique and original manner, whilst giving particular attention to the intangible presence of each individual plant. Woven throughout are decorative elements and narrative compositions that provide a window into the many diverse legends and myths that pervade the plant kingdom. After over 5 years of research, planning, and execution, the project is expected to come to fruition later in 2016.

Q: If you could do any project with full funding what would it be?

A: Portraits are actually my preferred subject, though the composition is generally most successful when there is minimal direction from the client. The dream commission is always the one featuring a specific subject, providing focused intention, yet with no over-the-shoulder art direction. In part because of my inherently laborious process, these types of projects are relatively rare, but I would eagerly embrace the opportunity to paint more renown personalities of historical and cultural significance. The challenge is to portray the subject’s unique character with nuance and sensitivity, whilst yet elevating their mythical persona to an archetypal level. I regard my portrait of Joanna Newsom to be successful in this regard. This careful tempering between the intimately personal and the universally timeless is what I strive to cultivate with my work, and I hope to pursue this endeavor to greater depth, and on a larger scale, in the future.

Q: If you could meet any artist who is no longer living, who would it be and why?

A: Hans Holbein’s dignified visions of the meticulously rendered human subject never fail to humble and amaze. I imagine that a few days watching him work would be tantamount to divine illumination. There remain many questions about his techniques and painting methods that could only be answered by being privy to his process. David Hockney, a modern british painter, has proposed that Holbein used optical projections to assist with laying out his portraits. Even if that charge is true, there is no rival to Holbein’s nuances of light and shadow, no competition to his fastidious rendering of metal, stone, wood, and flesh. The compositions alone are worth studying for the ingenious use of space as it exists on 3 planes.

Q: Tell us your thoughts on the environment and preservation? Do you have any conservation interests that are particularly important to you?

A: While my work doesn’t specifically allude to conservation themes in a literal sense, the natural world and the tangible forms of the earth itself are highly valued. My aesthetic principles are rooted in the idea that nature provides a model of perfection that we are already a part of, and we are further blessed with the means to be conscious of the fact. I essentially believe that spirit is experienced through matter, and therefore I advocate responsible stewardship of the earth’s resources. This intention can be extended to my philosophy regarding Art in general, which is that it reflects a continuum of human consciousness. Preservation, be it environmental or cultural, encourages a reflective understanding of the past, and a sustainable approach in meeting the future. It is my opinion that Art -painting in this case- effectively bridges the paradigm between where we have collectively come from, and where we are going.

To apply this philosophy to my working process, the extensive time that I invest in creating one static image echoes my goal of compelling the viewer to meditate on the value of stillness. In my experience the static image provides the most concrete reference point for meditative reflection, inviting one to become aware of the relationships that exist between forms. If one is willing to look, awareness of these relationships opens the door to a much deeper understanding of the world we inhabit. For this reason an intimate still-life painting can be just as profound as an ennobling portrait, or an epic landscape. I endeavor to emphasize the infinitely wondrous complexity of relationship in all my compositions.