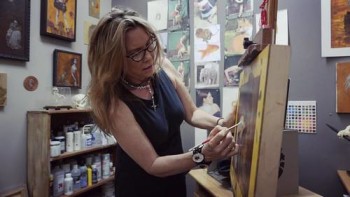 Celebrating the hard-earned wisdom of childhood, Sullivan-Beeman depicts subjects who are often young, hauntingly innocent, and teetering on the edge of naïveté. She uses her personal dream journal to provoke her artwork, exploring Jung’s collective unconscious with an overt curiosity for the bizarre and the esoteric, especially alchemy and the tarot.

Her work has been shown at many galleries world wide.

Deirdre Sullivan-Beeman is a self-taught figurative painter who uses modified oil and egg tempera techniques of the 14th Century Old Masters to create magical realism works that appear to glow from within.

She begins by applying an imprimatura layer onto a gesso board. The imprimatura is comprised of 50% raw umber and 50% odorless mineral spirits. On top of the imprimatura, she sketches her composition with more raw umber.

Egg tempera is then mixed by hand. To start, Deirdre cracks one egg into a jar and blends it with a little walnut oil and damar varnish. She then adds double the quantity of distilled water and shakes well to combine all.

Next, Deirdre adds a teaspoon of the fresh egg tempera to titanium white powder and joins the two together with a pigment grinder. This mixture is what she uses as an indirect grisaille. Grisaille is a term for painting executed entirely in monochrome, or near-monochrome. Once the grisaille is finished, she begins glazing the piece with transparent layers of oil, applying washes of color. Up to 40 layers of glaze may be applied to a painting. This creates a reflection through the grisaille– like the sun shining through a stained glass window.

A: The method I use is called Mischtechnik. Ernst Fuchs and his contemporaries created this method of mixing oil paint with egg tempera as they were trying to replicate the ways the Old Masters painted in the 14th century.

Fuchs and his contemporaries theorized that the Old Masters never painted directly but instead used many thin layers of egg tempera, which is regarded as the first paint. When I was first starting to study, I experimented in acrylic. I felt I could never get my images deep enough. Figures seemed to fall flat. I was seeking a way to get my images to “glow” internally.

Finding the work of those who were embracing these old materials and old techniques felt like I was finding my calling. I was lucky enough to study with the late Robert Venosa, who was a disciple of Fuchs and his contemporaries. In practicing Mischtechnik, I found that after layering many thin sheets of oil paint with egg tempera, figures do start to contain internal luminescence. Now, when I turn the lights off and the painting continues to glow, that’s how I know it’s finished.

Q: Have you been trained, and if so from what institution? Or are you self taught?

A: I am self taught as a painter. My BFA from the University of Southern California was in Cinema/Television Production. After graduating, I spent 14 years in scenic production and in event design. I loved creating fantasy worlds. I left events to pursue fine art, and studied with some of the folks mentioned in Q1’s response. Certainly forever grateful for their guidance and inspiration.

Q: When you create art is there a particular message you intend to impart?

A: My intent is to impart a nuanced sense of how I experience modern femininity / what it means to be a girl in our world. The subjects of my paintings are young women, teetering on the edge of naïveté; an animal often accompanies them. Their animal companions represent daemons, who metaphysically connect to the heroines to their source of power. Their daemons accompany them and ground them through complicated, slightly twisted narrative scenes. I ultimately hope the viewer leaves my work with a sense they have encountered a truly formidable entity, the female subject.

Q: Was your family supportive of your artistic endeavors?

A: Art feels like home, and has been a part of my world since the start. My mother is an art photographer. My first memory of art within the family is being 5 years old and winning a coloring book from a birthday party. My mother wouldn’t let me color in it. She thought it would dampen the development of my imagination. I was only allowed to keep the book to copy from, and I could color in my own knockoff. She was my first art teacher and probably one of the best. She forced me to think outside the box. As someone who had first-hand experience with the ups and downs of the professional art world, my mother discouraged me from pursuing art professionally when I left high school. I also had no desire to replicate the instability I knew the life of a professional artist could be subject to. I didn’t want to compete with her, either. So, I studied film-making at USC instead; but eventually, painting drew me home. 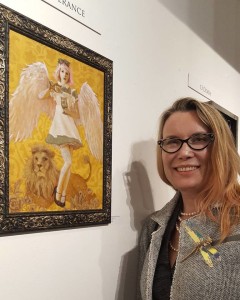 A: The main thread of inspiration that ties my work together is my hesitation to govern or judge images that come to me subconsciously. I am constantly looking for primordial images that arise while asleep and in daydreams. Once I see an image I love, I try my best to seize it fully before it slips away. Many of them end up as scribbles in the dream diary I keep next to bed. I feel strongly that dreams are super rich black holes of images and ideas that stem from the Collective Unconscious as it is defined by Jung.

A: I have always been fascinated by this phenomenon as “the reservoir of our experiences as a species.” These dream images get mixed with symbolic references and glyphs, and become my work’s subjects and scenarios. Since my educational background is in film, I always attempt to narrativize. I place my girls in the midst of a complete narrative thought and try to capture its most poignant moment. Often, this moment is one that speaks to the girl’s experience of innocence, or the losing thereof. My love for movies like Vadim’s “Barbarella” and Polanski’s “Tess” are undying.

Q: Are there historic artists who influenced your style?

A: I am generally most influenced by the way the French masters paint – Bouguereau, Ingres, Gerome. Thematically, I am influenced by Dali, Leonora Carrington, Remedios Varo, J.C. Leyendecker, and Norman Rockwell. Mati Klarwein, who had been a protégé of Ernst Fuchs, was also a huge inspiration to me. When I saw Klarwein’s work for the first time, on the cover of the Santana album “Abraxas,” it was like looking into a dream. That definitely feels like the moment I fell down the rabbit hole.

A: I hope to be remembered as someone who took a risk as a figurative artist. Gut reactions from viewers are what I seek – even when they are negative. I find that my work is usually love or hated. There is often no in-between, and I enjoy that! I like to cultivate a wide emotional range so that the art and the viewers reactions are united into one. They are yin and the yang. Without the viewer there really is no art.

Q: If you could undertake any project with full funding what would it be and why?

A: The art world has been primarily male-dominated since the beginning of its commercialization. My dream project would be one that spent its efforts elevating female artists. There are many programs that benefit artists, but there are few organizations and foundations that direct their support solely to women. Women artists are chronically underappreciated, and there are so many of us that need and deserve the support.

Q: Majestic symbolizes a grand endeavor, a great undertaking, or something exalted, imposing, lofty, magnificent… What mindblowing mark on the world do you wish to make with your art?

A: I wish to use my art to tangibly and positively change the experiences of women and girls. If I can offer support to females who see themselves and/or recognize their own feelings in my work, I will have succeeded. I aim to help them feel understood and encouraged to express themselves honestly, without fear of judgment. I also aim to offer support to folks who are interested in creating art, many of whom may hesitate. If you hear your creative voice, you must speak it. Become comfortable with it and nurture it. Feel the fear and harness it into kinetic energy. The first (and my favorite) Tarot card, The Fool, encompasses this sentiment for me. The Fool walks off a cliff and simply expects the net to appear below him. He acts from his inner self, not his ego. His animal sidekick faithfully follows him, a little white dog representing intellect.

Q: Myth a story, especially one concerning the early history of a people or explaining some natural or social phenomenon, and typically involving supernatural beings or events. In Miroir we are also interested in modern Myth and the surreal. How does your art create Myth?

A: Each girl I depict has an animal with her. I see these animals as the girls’ daemons. The creature the daemon is, in Greek mythology, a supernatural being somewhere between god and man. In my work, each daemon is the animal that represents the spirit of my girls. The daemon is also her protector, guider, and intellect; it mentors her onto her path of adulthood. I am fascinated as I watch today’s girls as they add to, recreate, and broaden the Myth that is Woman. In my attempts to present today’s girls through my work, I feel myself attempting to capture this Mythmaking as it unfolds around me. I place today’s girl beside her daemon in nature. I surround them with the glyphs and symbols the Collective Unconscious has given to her story, and I let the girl tell her tale.