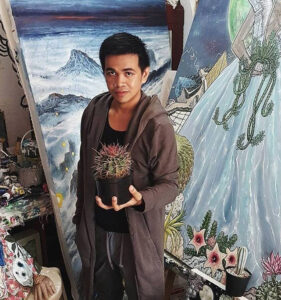 Semper’s drawings are executed to imitate woodcut prints, embody a personal, invented mythology (fernal) after the fashion of William Blake in the early nineteenth century; the symbolists, surrealists and decadents; and up to and including British artist Patrick Woodroffe’s Mythopoeikon (1976) and The Pentateuch of the Cosmogony (1979) and the forerunner of Vienna School of Fantastic Realism, the influential visionary painter, Ernst Fuchs. Semper’s woodblock style drawings and paintings has some affinities with Albretch Durer’s, but is quite unique, drawing heavily on both the Roman Catholic and supernatural folk traditions of the Philippines, quantum mechanics, alchemy, world mythology, classical art, occult, art nouveau, and the gamut of erotic drawing from Japanese Ukiyo-E to Aubrey Beardsley.
Gromyko sees his artwork as a mystic revelation of a hitherto unknown mythos and pantheon, a synthesis of Jung, Kabala, Gnosticism, and various archetypes borrowed from the ancient civilizations of the Mediterranean, the Middle and Far East to encode a synthesis of his views.

In 2009 he worked with Mexican artist Hector Pineda to co-edit the book “Imagine the Imagination – new visions of Surrealism” (ISBN ). He was also included in the publication.

His works are also included in numerous publications particularly related to the Visionary/Fantastic/Surreal art Genres, the latest of which was Liba Warring Stambollion’s colophon/book “DIVINING THE DREAM”, published in winter 2012 on Paris, France, where his work is published alongside the top names of the aforementioned genre. He was also included in the Latest encyclopedia of surrealism, published in Vienna,Austria, the “LEXICON SURREAL”, edited by emeritus Prof. Gerhard Habarta. He is recognized internationally as an active voice of the Visionary Art movement.

Semper is among the 1,500 artists and writers whose works will be sent on a time capsule to the Moon. The ongoing project, The Lunar Codex, is led by Dr. Samuel Peralta in partnership with the U.S. National Aeronautics and Space Administration (NASA).