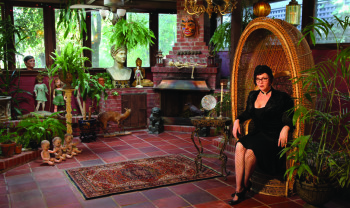 Marion Peck was born on October 3, 1963 in Manila, the Philippines, while her family was on a trip around the world, and grew up in Seattle, Washington. She received a BFA from The Rhode Island School of Design in 1985. She studied in two different MFA programs, Syracuse University in New York and Temple University in Rome. She currently lives in Los Angeles, California.

A: I’ve always painted in oil, because it is simply the best. I don’t like acrylic paint; it feels like plastic to me. I can’t get anywhere with it, though of course, other people do beautiful things with it. For me, oil paint is the king of mediums.

Q: Do you consider yourself a storyteller, myth-maker or legend maker?

A: I consider myself a painter, a maker of images. Stories will emerge in the mind of the viewer when they look at my paintings, but it will be a different story for everyone. I don’t think of a story and then set out to paint it. That would be illustration, which is less interesting to me. Instead, for me, the image comes first, the stories come after. It’s more of a dream-like mindset, less literal. All the loose ends don’t necessarily get tied up. Dreams and myths are very similar. As Joseph Campbell said, dreams are our personal myths, and myths are our collective dream.

Q: When you create art is there a particular message you intend to impart?

A: Again, I want the “message” to be a visual one, not literary. I want my message, which comes in the form of an image, to be particular, poetic, an ineffable essence. In reality, meaning contains so much that is non-verbal, but our normal way of thinking wants to turn everything into words that we can neatly catalog. So yes, I very much want to impart a “message”, but it’s visual, not a verbal one.

Q: Are you interested in ancient history, archetypes, fairytales, or other forms of mythology, if so, what myths in particular and why?

A: I’m very much interested in all of these things. Right now I am actually in the midst of an amazing trip to Greece, where I have been visiting ancient ruins, and getting so inspired it’s crazy. I am intensely interested in classical mythology, because I am also a student of astrology, and classical mythology is the language astrology speaks in. I find astrology to be endlessly fascinating, a deeply insightful, fantastic tool for understanding myself and others.