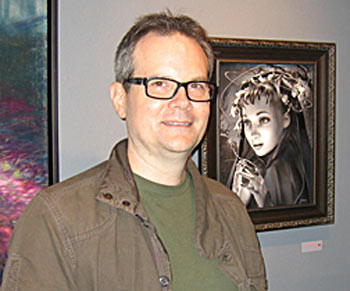 John Brophy creates highly detailed paintings that blend artifacts from global cultures and belief systems and juxtaposes them with the overarching affects of western consumer culture. His extraordinary style combines the use of a computer as an art making tool (he designs 3-d models of his paintings as a guide first) as well as the intimacy of painting (he then completely hand paints the imagery onto panel).

Taking cues from the religious imagery of 15th century Flemish Primitive art, he takes their use of intimate compositions and understated gestures and reworks them using contemporary imagery to create surreal yet immediate new icons for the modern age.

A: This is actually a hard question to answer. And to be perfectly honest I really don’t know. It’s often hard to identify where my ideas come from. Sometimes the image of a complete painting will pop into my mind fully formed. But other times the concept will come only at the end of a long road of trial and error. Other times it’s a matter of simplifying and reducing something that is chaotic and complex down to its core essence.

Q: Are there historic artists who influenced your style?

A: The work of other artists used to influence me much more in the past than it does today. I have always loved the work of the early Flemish painters like Memling and Van Eyck, whose styles more closely resemble the kind of painting I do. But I also love the 17th century Dutch painters like Rembrandt, Dou, Vermeer, etc, even though their styles are very different from mine. I still think that Rembrandt was the greatest painter to ever live.

Q: If you could undertake any project with full funding what would it be and why?

A: It’s not related to art especially, but I would love to fund and promote science education in the public school system. And along with it I would love to see the introduction of classes to teach kids from a young age about how to think critically, and how corporations, politicians, etc, attempt to control the public by using sophisticated marketing strategies and the psychology of persuasion. The late Carl Sagan used to call it the “Baloney Detection Kit”.

Having these skills would provide kids with the ability to recognize when they are susceptible to buying into bad ideas, and also how to ask the right questions to best investigate the credibility of certain claims. We could all have benefited from this during last year’s election!

A: I have a two part process that I follow when making my paintings. I first work out the entire composition using the technical skills that I learned during the 12 years I worked in the computer games industry. I use a variety of software programs to do this, such as Maya, 3DS Max, ZBrush, etc for modeling, V-Ray and/or Arnold for shading and rendering, and Nuke and Photoshop for compositing.

Once everything is worked out to my satisfaction I have a print made at the same size the final painting will be and use it as a reference while I paint. I then transfer a line drawing to the canvas or panel that I will be working on and then recreate/translate the computer generated composition into a hand painted art object using traditional oil painting techniques. This translation from a computer generated image into a handmade painting is a very important part of my work.

It’s a very involved and time consuming process, but I feel that it gives me the greatest amount of control.

Q: Do you consider yourself a story teller, myth maker or legend maker?

A: I don’t consciously try to convey a narrative, but sometimes the completed work can suggest one. If there is any story telling or myth making involved with my artwork I feel that I’m just as much a spectator as the people who look at my art.

Q: When you create art is there a particular message you intent to impart?

A: The main question I ask myself at every stage of a painting’s development is “Does it work?”. And if it’s not working, then how do I fix it? This is basically a gut feeling or intuition. Rarely do I design a painting to tell a specific narrative. They all come about as a gut instinct.

For example, the painting I did some years ago called “Neroli” started out as a desire to paint a woman wearing a burka. The problem was that you wouldn’t be able to see her face. So I thought about making the burka transparent. And eventually she became a space girl with a big glass domed helmet.

This prints and others are available at Roq La Rue Gallery or on John’s website.

John Brophy was featured in these Miroir Magazine issues: