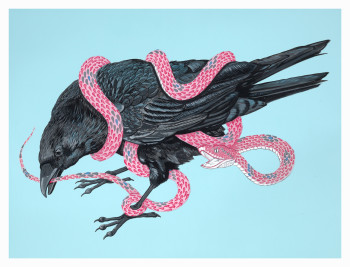 New Synthesis is a body of work  by Neil M. Perry slated to debut at Portland’s Antler Gallery on April 24th in a two man show titled Entwined,  (also featuring the wonderful work of Josh Keyes).

Of this new work the artist states: “Each of the paintings in this series depicts human relationships via a combination of animal association and color psychology.

The seven heads are symbolic of binary relationship archetypes. The personality traits bestowed upon the animal, via cultural anthropomorphism, represent one element and the color/pattern of the snake illustrates the other. The two subjects are not always conflicting personalities, the series (ongoing) explores the wide spectrum of human relationships.

The larger pieces that focus on full animal anatomies explore more complex ideas about the relationships we develop with our own personal psyche, those close to our hearts and the wider society in which we exist. I’m interested in the dangers of groupthink, the nuances of differing cultural or national sub-conscious and the ways in which we choose to interact within specific social circumstance.

In science and philosophy when two ideas are fused to produce a new idea stemming from the common and imperative aspects of each the product is called a new synthesis. Whenever we endeavor to build a relationship, when we choose to feed it rather than let it die, we subject ourselves to the same process. In order for a union to be born we must reconcile or compromise so that a new synthesis can exist as a vehicle for both elements to move forward together.”

The New Synthesis collection by Neil M. Perry will be on display at Portland’s Antler Gallery, April 24th – May 26th in a two man show titled Entwined. Josh Keyes will also be presenting a collection titled “The Forest”. The artist reception will take place on April 24th.