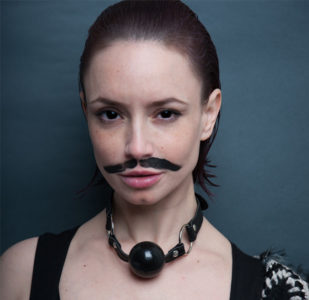 Q: Could you describe the evolution of your style, and how you arrived to prefer this medium?

Q:The inspiration for your drawings derives from Japanese tradition as well as classic and religious myths. What comes from your personal research and what is part of your studies?

A: It all begins with my total refusal for reality. Since I was a child, I was so into the world of manga and Japanese cartoons that I totally assimilated their cultural elements and behaviors.
I started to be fascinated by classical and religious myths because Japan has always been very interested in the Western world and, specifically, to Italian culture. Our icons; our angels and devils; our saints and martyrs are a great inspiration for their authors in a lot of fields, from literature to the pop culture of manga, anime and videogames.

Technically, I am Italian, but I look at the world through Japanese eyes, and this makes me look at my surroundings with great curiosity.

Q: Could you share with us how have you developed your passion for manga during your artistic journey?

A: After school, I decided to attend a comic and art academy. I have been reading manga for ages, and I was very curious of understanding how to delve into such deep themes to move the reader to reflect and, sometimes, move them to tears. I wanted to narrate stories, create worlds and give life to fragile and heroic characters. For two years, I have been working on a comic for a mangaka call by the publishing house Kodansha. I was among the last 20 in the last round, but I didn’t win. At the end, it was a great result but the delusion was so strong that I decided that I wouldn’t ever create another manga again. Since then, I dedicated my art to transmit emotion in only one, strong and charismatic image. My love for manga is still burning today, and it is influencing many of my pieces.

Q: As well as Japan, you are often working between the United States and Italy. In your works, you combine of all these visual elements, how do you relate to cultural differences as an artist?

A: Cultural differences can be crossed over only through knowledge. I find the variety of cultures very stimulating with their holy and profane backgrounds, and their taboos. I usually try to not disturb other people’s sensibility or to create images that can come across as offensive. Art has the duty of making people interact and inspire curiosity by showing something that can stimulate their questions. I like to flirt with the spectator without ever being too offensive by sending uncomfortable or unpleasant messages – and this attitude goes beyond cultural differences, it is my nature.

Q:The variety of your background is represented by the different personalities of your characters. How does this diversity inspire your creativity?

A: The core of creativity is in the change, in the evolution. ‘To create’ not only means to produce something that wasn’t there before, but also to not repeat the same dynamics; to not always represent the same thing; or the same state of mind – that’s why my characters are unique creatures. I am terrified by the idea of being ordinary; of disappointing the expectation or not surprise anymore. But I also like the idea of being a sort of an illusionist that keeps the attention on a cylinder from which none knows what will come out. Creativity and variety should always be part of the artistic journey. Only the fear of trying can kill them both.

Q: Some of the protagonists of your drawings are almost fused with animals; does this define the personality of your women?

A: The majority of my women have a negative connotation. I have always been obsessed by others’ beauty, and I am often shocked by how women are using the way they look in the wrong way. Beauty is a malediction rather than a gift because it is ephemeral and, sooner or later, it will go away, leaving behind only an ugly soul. We are living in a time when beauty and youth must be visible, shown off and preserved at any cost. They are both the banner of a society that is losing the sense of measure and truth. In my illustration, the animals are representing the purity of nature, the brutality of life and the cruelty of the feminine.

Q: One beautiful example of this fusion is Vicious Lovers with the model Mika Mae Jones. Do you think that female beauty is also expressed in our relationship with animals?

A: Vicious Lovers starts from my need to show a beautiful but fragile creature like Mika in opposition to the brutality and aggressiveness of the magnificent swans. It is one of the rare cases in which the female figure is succubae of nature’s brutality. The animals are the only pure creatures of this planet, since even when they are violent or brutal it is not for a selfish scope but because that’s how the world is. We are also animals, but we have created social convention to suppress all our instincts going against genetic and ancestral laws. Anyone who is loving and protects animals makes themselves a better person because the soul gets closer to feelings and emotions that we have lost in time.

Q: When looking for a subject or a model, which elements do you like to portray to illustrate the beauty in the female form?

Q: Your last project is a commissioned painting for Long Gone John. Could you tell us a bit about the work and your relationship with John?

A: Long Gone John is one of the most incredible and wonderful persons I’ve ever met. Our paths crossed in late 2010. For me, it was a very hard time, and I could not draw anymore. I was completely empty and depressed. He helped me to move on, and since then, he is my guardian angel. A few months ago, he proposed me to realize an illustration for a project called ‘Tea & Sympathy’, in which are also involved amazing artists such as Ray Caesar, Kukula, Gary Taxali, and a lot of others. The realization of my homage to the 30 years of the Sympathy for the Record Industry took me six weeks. The piece is a combination of what Long Gone John loves most: portraits, small objects, cats, girls, stickers – a colorful chaos that is celebrating the life of an amazing man.

Q: What past project do you feel particularly represents you as an artist, and what future project inspires your curiosity?

A: After coming out from depression in 2012, I started a series called ‘Sketches of a Dangerous Mind’, which is still evolving today. The title was perfectly representing my state of mind, and the most peculiar thing is that was the moment when I abandoned colours. After bright pieces like the project on the Geisha, I had difficulty drawing again, and I started over from the sketches in which you could see the first shaped and sketched lines. Slowly, I started to insert some baroque details and some colours, but it took me years. Life often leaves painful traces even in an artist’s work; tangible and permanent traces. Today, I am in a new stage of my life. There have been so many changes, and it is time for a further development in both technique and content. I am going to realize a new series in which erotic, beauty, Japanese culture and ‘censure’ will show a side of me never seen before. Curiosity is that thing that allows you to move on from your fear and steer to something new – I do really wish again to surprise my followers.