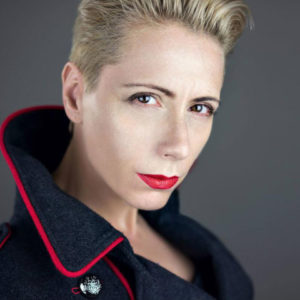 Q: Tell us about your art and what inspired you to produce imagery about futuristic, science fiction or fantasy themes.

A: My work deals mainly with issues of gender parity, women’s empowerment and propaganda. In today’s world we are in desperate need to create a different narrative of women as capable, strong and empowered. Most of Western culture and history is told from a man’s perspective and we are frequently exposed to imagery that objectifies women and portrays them as accessories. I want to change that by using the visual language and symbolism of propaganda that I was exposed to growing up in East Berlin. I use military outfits and accessories as attributes of power and agency in my paintings.

The pilot girl in particular features in many of my works. She is symbolic for modern day women, who are freedom fighters, daredevils and rebels. The act of flying carries so many associations to humans not only relating to space travel, pioneering and exploration but also to the feeling of being weightless and above earthly problems and concerns.

My recent works feature the pilot girl falling or floating, with a complete sense of abandonment and trust. I can see many parallels to our current times in a highly volatile world that carries so many threats and dangers, all we can do is take a leap of faith and jump. Once you have made that step there is no turning back and you will have to accept the path you have taken wholeheartedly. I want women to feel that we can overcome anything – “we are the storm”.

Q: Is there anyone who has strongly influenced your style or direction in art? Or is there any artist past or present who inspires your art in any way whom you wish to mention?

A: I am hugely influences by my peers, especially in the contemporary figurative realm. I look up to artists that use their influence to drive positive change in society and cause us to stop and think. Here I include Shepard Fairey, Angus McDonald and Ben Quilty. I also admire powerhouse Del Kathryn Barton who is such a positive role model for young female painters, being the first women painter to break into the top 10 bestselling living artists in Australia. I think all of these leave a lasting impact on our planet and contribute to making it a better place.

Q: Tell us a little about your preferred medium and technique, do you have any favorite products or applications?

A: My choice of color, poses and painting style are all deliberate and symbolic. Referencing the hero images from my youth in Communist East, I wanted the faces of my subjects to tower over the viewer as larger than life heroes and idols—like monuments or sculptures, untouchable and strong. Leaving part of the faces as raw background symbolizes the loss they may have experienced, or the sacrifice they had to make. I deliberately choose to leave out the darkest areas of some faces as it is our darkest memories that we are leaving behind. I often opt for soft, subtle, earthy colors that almost dissolve into the background, to remind us of the people’s fragility and softness.

Q: In a few words, what would be the perfect future, if you could imagine it into reality what are your hopes, dreams, or expectations for the world?

A: I would like us to achieve a greater sense of balance and equality in a world where male vs. female representation in all sectors of society are still disproportionate. I believe a first step is awareness and creating a dialogue. Unconscious bias is by far more prevalent than actual conscious prejudice. There are some really damaging believes alive that discriminate against women. What we need now are some very powerful and strong role models and a new and positive brand of female empowerment. My own art practice aims at achieving that. My work portrays women as protagonists, active agents in charge of their destiny. Too much of Western art depicts women as passive and objectifies them. It is important to me to change that and create imagery that modern women can identify with and relate to. Imagery that inspires and empowers. Eventually we will reach a tipping point when it will feel natural that a women wins an art prize or receive the major retrospective in museum or get the major public commission.

Q: If you had full funding for any project, what would it be?

A: I am currently working on a major project that involves working with women from marginalized communities and giving them a voice through a series of large scale portraits. The plan is to exhibit them in non-commercial settings and bring their stories to a wider community. It is progressing slowly as I don’t have full funding for it. So having it funded would be awesome.