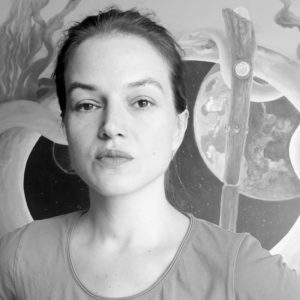 As a young girl Sabina often spent time dabbling at her uncle’s and aunt’s atelier; seduced by the aromas and the magical atmosphere, these sessions undoubtedly set the base for her artistic development. A treasure hunter at heart and fascinated with the diversity of cultures and people, she was especially infatuated with anything that seemed different or exotic, be it trinkets from far-away countries, customs from distant lands, or new ways of approaching old habits. This passion and curiosity also led to her interest in psychology.

She studied music at the conservatory of Vienna to which she was accepted at a young age of 12, joining the class of Prof. Inge Scholl-Kremmel for classical guitar.

Her interests and talents were always wide-spread, yet the focus of her passions most firmly remained on the visual arts, psychology and writing. Despite her status as a musical prodigy, she left the conservatory and turned to painting. She studied fine arts and psychology; although she ceased formal studies, she vowed to never stop learning and advancing in these fields.

At the age of 26 Sabina became the co-founder of an international web design and development company, focusing her talents, for the time being, towards commercial arts. During this time, versatility of creation roamed and she also learned to appreciate the elusive art of coding.

Her art has been described as surrealism, fantastic or visionary art, poetic symbolism and others.

Q: Tell us about your art and what inspired you to produce imagery about futuristic, science fiction or fantasy themes.

A: My inspiration comes primarily from my inner worlds. Of course, these worlds are inspired, and influenced by all kinds of things, events, feelings, thoughts, hopes,… so, in short, everything goes!

Q: Is there anyone who has strongly influenced your style or direction in art? Or is there any artist past or present who inspires your art in any way whom you wish to mention?

A: The first great influence was indubitably Salvador Dali, I was about twelve years old, if I remember correctly. The discovery of M. C. Escher followed shortly thereafter. I was fascinated by their artwork and, in the case of Dali, also his rich, exuberant personality. The world around me seemed drab in comparison, at least at the time, to the world I imagined Dali to live in.

This infatuation has found its proper place over the years that followed, as my own life began to transform, becoming more colorful and rich, not least through meeting various people worth remembering.

Q: Are you formally trained or self taught? Tell us about your path as an artist.

A: I have had some formal training, but I consider myself a self-taught artist.

When I was 12 years old, I was accepted to the conservatory of Vienna, which is like a university, for classical guitar. I was considered a prodigy, and treated as such. The following years were amazing, on one side, but they also taught me what can happen when our tools (the mind and the body) are subject to rigorous training that goes with the scholastic path. As opposed to music, in painting I managed to preserve that natural, uniquely individualistic flow, that would have been lost otherwise, at least in my experience. And so, I have learned by exploring, by observing, by trying things out. Experimentation has always played a big role.

Q: Tell us a little about your preferred medium and technique, do you have any favorite products or applications?

A: I have enjoyed almost any medium I tried out. At the moment, I alternate between traditional media, using acrylics, and digital painting. I love the non-linear process and the creative freedom that digital painting provides, so I have a slight tendency towards that.

Q: In a few words, what would be the perfect future, if you could imagine it into reality what are your hopes, dreams, or expectations for the world?

A: My hopes are for a more creative world. We know so much (and yet, so little), we have statistical data of all sorts, we have brilliant minds at our disposal, people who are actively trying to improve things and inspire change, by coming up with new, fresh solutions to the old, molding problems. To combine efforts of smaller groups into a larger, well-structured and meticulously organized project, well… it sounds hyper-utopian, but it would be doable.

Q: In practical terms, as things are going, do you see the future of human kind as a Utopia or Dystopia? Do you have hope for the survival of the planet? Please give us a brief explanation.

A: I am sort of an optimistic realist. If I were to consider everything that is currently going on in the world, the trends, statistics, obsessions, tendencies, I would have to foresee a dystopian future. On the other hand, I believe in miracles. Small things can explode into a huge difference, suddenly shifting the odds towards a utopian existence, so everything is possible, even today.

Q: Do you see yourself as a forward thinker, and if so what solutions would you propose for saving the world? Or do you feel it needs saving?

A: What is the future? It’s the new generations, isn’t it? It is their world we are talking about, and so I would propose to help create strong, intelligent, capable, kind, but sharp individuals. I have devoted the majority of my life to this, and would like to do even more in this regard in the coming days.

Q: As an artist do you feel you have a voice which could influence or change your audiences view of world events? Do you feel it is a responsibility of an artist to bring awareness to certain issues?

A: Art is too versatile to have one single responsibility or purpose. Different artists create from different realms of inspiration, covering different grounds, and audiences.
As for me, I used to sing quite beautifully, though my voice is rather deep and by no means typical for a woman. Those who prefer a soprano (or a tenor, baritone, bass…) possibly wouldn’t know what to do with me and my artworks.

Q: If you could go back in time fifty years, what would you tell the world to do differently and why?

A: I don’t think fifty years are enough, but if the time machine was stuck on that setting, I would want to encourage or inspire the desire or the necessity to travel. Not just anywhere, or anyhow… It would have to be a journey as a sort of rite of passage. The discovering of a completely different culture, being surrounded with (what seems like) a world that lives according to different rules from those one has grown up with, instilling the richness of cultural differences, providing the traveler with the sense of being a foreigner, being the odd one out. If this was done worldwide, in all countries, a common rite of passage to be undertaken at a certain age, can you imagine the long-term and worldwide impact?

Q: Do you see humankind making space travel an option in our future, if you were asked to go to another world, would you choose to go?

A: Absolutely! To both. In regards to going to another world, provided the idea wasn’t to simply duplicate existing societal and political systems, but to create something new? Definitely.
In that case, the efforts and struggles associated with any new beginning, esp. one on such a grand scale, would be justified.

Q: What advice do you have for artists just starting out?

A: Be real! And by that, I neither mean the cliché of authenticity, nor the cliché of the individualistic artist, but something much deeper. Be true to who you really are. First, find out who that is. Dare to live that. If you are not going to live your art, but simply focus on success and sales, that’s fine too. In that case, you can be a painter, which is also pretty cool.

Q: If you had full funding for any project, what would it be?

A: It would be a kind of institute or academy for teenagers, not meant to replace general education, but rather as an additional stomping ground, combining philosophy, psychology, art, literature, chess, sports, and martial arts.

A: Well, I am finally working on a book I have been carrying around me for years. It’s too soon to make any grand announcements, but I am blissfully content about gradually releasing the pressure on my memory storage.
Other than that, I am also part of a large-scale art project, but am not at liberty to discuss it further. It’s going to be a while, at least a year, before it’s ready for the public.

Q: If you were to attribute any emotional, spiritual, or physical context to your art, what would it be? Is there a story behind the image, a feeling, a dream or belief? Or perhaps the art you create is a manifestation of very real physical experiences?

A: This is a tricky question, for me, as I don’t see feelings, thoughts and experiences as completely separate realms. They have a common origin. I don’t think the English language (nor any other language I am familiar with) has a word for it though. My artworks are born in that same dimension or sphere. The manifestation to the conscious realm is not the same for everyone, depending on the individual’s awareness and ability to navigate between these realms. The painting process is, for me, the navigation from the birth of the artwork to its physical manifestation. For the most part, I try to keep out conscious thoughts or feelings during the navigating. It is mostly after the work is completed, that I look at it through those eyes, allowing thoughts and feelings to fully kick in. This process of navigating through painting isn’t always equally “pure”, but some of the greatest paintings I have created, at least according to my own judgment, were done in this manner.