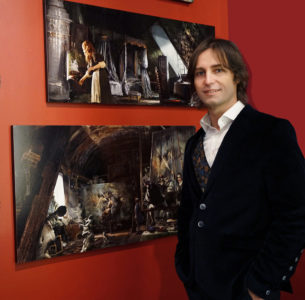 Federico Costantini is an art director, scenographer and concept artist who, for the past ten years has been working as first assistant to the legendary Oscar winning scenographer Dante Ferretti. Movies they worked on are Cinderella, Seventh Son, and Silence to name a few. Frederico also worked on other movies: Prince Of Persia, Charlie Wilson’s War, The Borgias.

The curator Luca Raffaelli who is one of the Italy’s experts in the world of comics presented “Gulp Goal Ciak” a show at the Museum Of Cinema La Mole Antonelliana in Turin, Italy. Here Federico Costantini’s and Dante Ferretti’s original artworks were hung as part of the show.
For example drawings for the movie Hugo Cabret, which were displayed along with original pieces of the most important comics of the last one hundred years. Little Nemo by Winsor McKey, Diabolik, and Tim Burton’s Batman and other comics which were made into films over recent years.

This is a story of art, love, passion and what lies beneath the secret of a backstage.
The magic of the scenographer and concept artist is to convert stories into drawings and images, which set the atmosphere for a film. They define the architecture, inspire the creative set and landscape of what we ultimately see in a film. They make the story come to life for us in those environments which they imagine for the characters.

There is of course a whole team which then builds that set, to create what the Scenographer has painted or drawn. The vision begins in the mind and the heart of the artist. The dreamers: writers, and scenographers, and the cast bring those stories to life.
Just as we imagine all the environments and characters from the books that we read, a scenographer can translate that into a work of art or a sketch, this is the starting place of a movie.

Federico’s drawings have power, they enchant the viewer, they give a feeling of movement even though they are still. The characters are easy and graceful, and at times they look like shy figures which mix into the background giving the environment itself the main focus of your gaze. Each piece, even the quickest sketch gives you the feeling that it is created by someone who knows what to say and how to say it.

Q: Tell us about your process and how it came to be:
“I think I’ve always done this, since I was a kid. Without even knowing it. I used to draw and then cut the figures and build little worlds for them. I was very shy, an observer more than anything. I paid attention to colors and lighting.

A:When you’re a kid what makes you draw is your own fantasy and your emotions and nothing else, when you become a scenographer you must still use the same skill, keeping that connection alive and accessible to your inner voice, but you learn to apply it to someone else’s world… in this way you can possibly achieve their goal and enrich the story.

I think this is an art that still treasures the spirit of handcraft, and sacrifice. An artist sometimes is free to paint when he is inspired, but for the scenographer, when a movie has to be done and finished in time, we have to learn how to keep the sparkle of inspiration alive, the dedication to move it forward, this is sometimes not easy at all.

When I started I wanted to become an architect, but in reality, I did not know what I was going to become. At the Fine Academy in Rome I started sculpting and painting classes, I remember one day a friend of mine approaching me saying ‘hey you should try scenography it’s so much more fun!’ So I decided to give it a try”.

Q: Do you think it’s always a screenplay that inspires a scenographer or did it ever happen, to you, that a drawing inspired the writer or the director?

A: “Yes well, of course… just like the show in Turin is proof that drawings and images inspire writers and directors. It happened to me also, for example during the preparation of Cinderella by Kenneth Branagh one of the scenes described in the screenplay it was taking place in the palace where a painter was working on a huge portrait of the prince. In screenplays, not all details are described specifically… so with Dante Ferretti we decided to have the painter sitting on a swing in a funny, uncomfortable position. It seems like the director really appreciated this concept because he added the swing to the movie scene with an unexpected gag of the painter falling from it.

Q: you’ve been working side by side with an Oscar-winner scenographer for years, what did this experience teach you?

A: First of all the approach to the work itself. Being allowed access to the big industry of American movies is something that of course gave me the chance to dream and create big. But Dante taught me the skill of staying true to the little things too. The budget is not everything. Dante is the kind of scenographer who would not simply recreate historical scenery exactly the way it would have been created in history, he would reinvent it as if he were an architect living in that era. The main thing is the scenography has to have its own personality, one must not simply recreate a landscape that is specific or “loyal” to the age, that is a lesson I treasure. It’s always a honor for me to work with him.”

Q: Tell me more about working on historical movies. I believe there must be a lot of study and research, for references… it takes a lot of effort and time.

A: “Yes, it does. Much research.
For example on the set of Seventh Son, which is actually a fantasy movie, though the scenography, is inspired by a medieval and oriental architecture, there are items and objects that might look out of place, like a mistake, but we have actually mixed them in on purpose to introduce the style of another era… in the end, they worked out perfectly fine. So, of course, a scenographer has to do research but he also has to be brave and dare to do something different or unexpected.

Q: Is there something we shouldn’t tell anyone?

A: Oh yes, many things!
For example, when the scenographer Marco Trentini proposed me to work with him on the Prince Of Persia, we were preparing it in Morocco…. at that time I didn’t speak English at all and I couldn’t read the screenplay. I drew images from impressions and explanations of the scenes given to me by Trentini, but the funniest thing is that in the end, what was realized/recreated wasn’t so different from what I drew.”

Q: Is there a technique you prefer using?

A: I prefer using pencils, charcoal, watercolors, gauche, oils… or a thousand different software programs on the computer…. well, in the end, any technique is ok. What matters the most is being able to create the atmosphere, the tool doesn’t really matter. The drawing should be like taking a picture of the movie before the movie is shot. Not in terms of perfect technique, but in regard to feelings.
Then, after a concept has been designed, there are amazing craftsmen that build the scenes that come from the drawings, it’s a fascinating process and they are passionate collaborations.

Q: Besides the work in cinema and theater you also worked on the preparation of big shows?

A: Yes, the Leonardo Da Vinci show at La Venaria Reale in Turin “Leonardo, Il Genio e Il Mito” in collaboration with Piero Angela, was one of them. With Dante, inspired by one Leonardo Da Vinci’s drawings, we recreated a head of the horse (Cavallo Sforzesco) in which the original drawings of Leonardo were displayed. This way people were allowed to materially enter into one of Leonardo’s (recreated) works, and be completely surrounded by it, almost as if they were eaten by it. A Gigantic head of a horse in a majestic game of lights, the result was impressive.”

Q: What about the relationship between a scenographer and a director? is it difficult to interpret their will? There must be different views which in the end must-see things in the same way, is this hard at times?

A: When I work with Dante, directors have full trust in his vision…the perfect way to collaborate is by trusting the person and the expertise of the other, trust is important. I’ve seen directors get inspired by the scenographer’s view of things, and I must say that when someone, like Dante or a director, believes in my work, I absolutely give my best… when you feel trusted everything gets fluent. But yes, of course at times things can be difficult, but it is not a matter of what job you are doing, but rather what kind of human being you are. If you are open to understanding, or not.

Q: Is there any other thing you shouldn’t talk about? Like upcoming projects for example?

A: Yes, well, besides the movie world… from time to time, between one movie and another I like to express myself through painting. My own art. I am working on the idea of a solo show, and will also illustrate a dark novel.