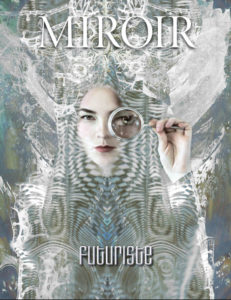 I don’t like to think of our future in terms of entropy, of course everything comes to an end eventually, I’d just like to see it thrive first, truly blossom into something wonderful, a tangible utopia, not just a figment of our hopeful dreams.
Although I have explored the genre of the dystopian Steampunk fashion for several editorials in the past, for this FUTURISTE theme in Miroir I wanted something with more of a flavor of optimism rather than ruin.
I grew up with the Jetsons, and then Star Trek and Star Wars, I had a different idea in my mind for what my future would be and it looks nothing like what we’ve got.
I honestly feel that all efforts to bring our world into that bright future have been sullied and thwarted by irresponsible and greedy politicians and corporate interest groups that needed things to stay the same, to chug along for as long as possible exactly as they are, so they can keep profiting. With no care for the damage done or what would be left for future generations. It was not supposed to be like this.

The problem is that our parent’s generation created a world of convenience, a throw-away mindset, where it is cheaper to get rid of something that is broken rather than fixing it. They made significant and in some cases irreversible choices which have polluted our environment and hindered our advancement. They kept the technologies at bay which might have fueled our utopian future, and provide clean sustainable energy. This wasteful society is unconscionable. The fact that we were too blind for too long is a sorry excuse for what we let happen. And the cost of the negligence is the health of our planet. Regardless of the reality of what we have done, I want to imagine a future where energy production is not dirty but rather, it is pure, free and plentiful. Which gives people the chance to use their time for creative endeavors and to prosper.
There is no poverty, starvation, or need to do desperately wrong things (because there is no other way to survive). People have their essential needs met, there is no reason for despair, there are no unwanted or neglected children, no homeless, no veterans of endless wars. I could go on but I have wandered away from art, and fashion.

My art for this theme is a deviation from what I have previously done. Using a mixture of techniques which are, in some way in opposition. On one hand, I like what digital 3-D makes possible, and other effects which I can create using Photoshop techniques, but I am also inspired by the figures and flat plane use of patterns and textures which is indicative in the Japonisme art movement. Artists such as Harunobu and Utamaro who inspired Klimt and other painters in the late 1800’s, many western artists took design elements and inspiration from this period in Japanese art. I have enjoyed exploring this sort of cut out masking technique to cloth my models.

While doing this I remembered using a Sears catalogue as a child to source fabric patters that I would cut out to cloth my paper dolls. At that time I was sure I would grow up to be a fashion designer. Little did I understand about economics and the simple fact that my family could not afford to send me to schools in bigger cities. Not to mention the very real limitation imposed by my severe dyslexia which would hinder my academic choices.

I won’t go into detail, but the path I took to get to this point involved printmaking, both woodblock and lithograph, collage, and painting. However, I never found a good teacher to instruct me in the foundation of painting techniques, The art schools I attended focused on “expressing yourself” I had no end of ideas, I just needed the knowledge of how to use the tools. I didn’t even know what an Atelier was, and before the age access the internet has provided, how would I have found one? I did what I could with the limited resources I had. Abandoning my focus on painting for photography. Starting with wet process film work, mixing negatives for a multidimensional effect, making mural sized prints and painting on them. When I no longer had access to a lab, I did experiments in Alt Process photographic printing. Finally I switched to digital and have worked with Photoshop since it first came on the market. I continue to paint textures which I use to layer into my photography.

When I thought of creating work for this theme, the images in my mind were of the sort that I almost needed to pick up a paint brush again to recreate that imaginary world, but even then it would not be possible to render the organic forms I had in my imagination. How to recreate that future where adornments and clothing might be grown, a living chameleon-like garment that adapts to the environment, giving its host more or less coverage depending on the climate, acting as a camouflage for the wearer or making them blend completely into their environment if necessary, rendering them invisible?
Or perhaps clothing is made at home in a 3-D printer. There might be ornate headpieces that would float weightlessly on the head. I have a lot of ideas, all of which are not possible or easy to make even if I had the resources.

Which left me with the simple fact that I cannot find such garments. There have been some Avant Garde designers I greatly admire, and who inspire my imagination along these futuristic lines such as Courrege’s space fantasies of the 1960’s, and of course Alexander McQueen, one of my all time favorites. Or my latest infatuation with the Dutch designer Iris Van Herpen. I am also drawn to the sculptural creations of Junya Watanabe, the translucent android series by Thierry Mugler, the Chain Mail fashions of Paco Rabanne, the sculptural and absolutely out of this world costumes by Gareth Pugh. Then there is Goe Pei who has pierced the heart of that fantasy world where I would be delighted to live.
But I don’t have access to them. This is perhaps the most challenging aspect for any creative photographer, where to find unique and interesting garments, accessories and props? Although I have been fortunate to collaborate with some very impressive and talented local designers in recent years. Whom I am indebted to beyond words. I could not think of anyone locally who would have ready to shoot items to fit this theme, neither do I have the time or money to construct them.

Which leaves only one alternative, I had to create them digitally. On these pages you will see my experiments. At least as close as I could come to what I see in my mind. A place where technology and organic forms are fused into a beautiful synergy to make timeless and elegant adornments. A world were art is valued and worn, and artists are treasured. Where everyone dresses creatively. (Why not, it’s my fantasy).