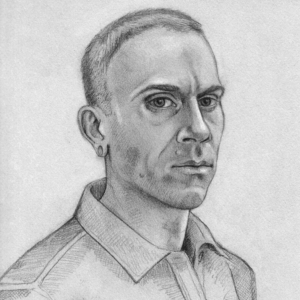 A: Many of my works are illustrative collaborations with musicians, authors, publishers, record labels, art directors, patrons, and other colleagues, so the impetus for creation often starts there. The perimeters of the specific project tend to provide the thematic structure and formatting of the image. As with many collective endeavors, the work follows an organic development within the context of a shared goal. Oftentimes, the unique subject being visually brought to life possesses a heritage of its own; an art historical precedent, a lyrical notion, an allegorical nuance, or a mythic narrative of some sort. Taking all this into consideration, the visual work is a culmination of myriad of influences, of which I am merely the guiding hand.

Alchemical symbolism provides an apt metaphor for this aspect of the creative process, the Rubedo phase of the Great Work, wherein a synthesis of divergent forms gestates in a simmering morass before being distilled down into an entirely novel guise. Viewed this way, the inspiration becomes self-generating in the sense that it’s what happens when the compounds are permitted the opportunity to work out their relationship to one another. The different ingredients commingle, possibly devour or digest one another in some manner, and ultimately become something greater than the sum of their respective parts. It’s not a tidy procedure, joy and turmoil swell in equal preportion throughout. Friction begets inspiration.

A: In my experience, any artfully composed image has the potential to shift awareness in the viewer. Whether we are discussing a duo-chromatic color field by Rothko, or a painstakingly rendered devotional altar by Van Eyck, the fulcrum point of cognitive transformation lies within the viewer. Certainly an image can be invested with intention, perhaps to direct the viewers gaze towards something fixed, by depicting a tangible structure, or referencing a specific narrative for instance. Yet how these forms are ultimately perceived will vary broadly depending on not only the identity of the viewer, but the time and the circumstances of the viewing.

Studying art history is infinitely fascinating for this reason, as it reveals how tectonic shifts within a society can render certain forms antiquated and obsolete, only to have them rise again in another epoch, perhaps in a different culture, and interpreted in a novel manner. To use just one well known example; the recycling of classical greek and roman imagery established the forms that we now identify broadly as embodying the European Renaissance. This is not a straight line drawn from one cultural epoch to another, but rather a circuitous route with innumerable amendments, purges, and permutations along the way. Indeed, the metamorphosis of ancient cultural forms continues to the present.

It’s appealing to suggest that certain forms are universal, and that they therefore have a predictable effect on the viewer’s state of mind. It’s understandable that we are collectively looking for definitive certainty as to what things are, and what they mean. If that expectation is taken literally by an artist however, the end result might be something akin to propaganda, where the goal is to manipulate the viewers perceptions into arriving at a predetermined conclusion.

Speaking from the position of being an observer, my experience has been that the greatest visual works refrain from making dogmatic statements or presumptions. The truly memorable and most impactful images permit the viewer to have their own experience, even when a composition is heavily loaded with symbolic insinuation, or informed by a specific narrative. To compel genuine catharsis then, a certain degree of ambiguity is retained, whilst alluding to the infinite.

Q: Do you need to have the right environment or setting to create a powerful image? If so, what preparations do you make to prepare the surroundings you work in?

A: I have worked in the same small studio for over two decades, a former residential cell on the top floor of a nineteenth century Convent. Aside from some basic renovations after first inhabiting the space, it has remained fundamentally static throughout that time, with one corner of the room allocated to drafting and drawing, the other being occupied by the painting easel, while the various tools, implements, and references of the trade are arranged around the periphery. There is a single window which overlooks a walled victorian rose garden, and affords a view of a pioneer-era cemetery across the street. A tall cedar looms just outside the window, and on it’s gnarled limbs I can observe squirrels and crows go about their daily business. It’s a conducive environment for laborious, introspective work.

It’s difficult to imagine working anywhere else at this juncture, though I imagine that if circumstances demanded, I could adapt to different surroundings. I have never undertaken to create paintings on large panels, and this is due primarily to the limitations of the existing workspace, so I admit that it’s interesting to speculate as to what might be possible in a more commodious Atelier. Alternately, in the time before the Convent studio, I lived in a one room cabin where all my work was executed on a small table, and before that it was done only in bound journals while I lived out of a backpack, so I’m very thankful that the Fates have provided a secure and autonomous devotional environment for as long as they have.

Q: Due to the pandemic, and recent political upheaval (in some countries) there seems to be a need for a new perspective. A New Beginning, Rebirth, A Clean Slate, The Advent of Something Better…. Do you feel it is the artists duty to inspire change? If so in what way do you hope to make a difference in your community or the world at large?

A: It’s an interesting line of inquiry, to contemplate the social role of the Artist, and their responsibility to the communities that they are a part of, whether regional or global. My belief is that leadership is verified by way of example, so if the goal is to provide a new beginning, a novel path forward, the inception would demand concrete examples of what that might look like in practice. This is a tall order in any vocation, but insofar as the Arts are concerned, I imagine it starts with the willingness to engage with others creatively, to offer up one’s skills wherever a genuine use for them might be established.

The cyclical periods of grace and crisis are inevitable to a certain degree, so what one does when the fruits are swelling on the vine is as important as when the crops are blighted. I endeavor to balance the fluctuations through staying focused on the creative goal, which to synthesize the perception of existential duality through the devotional practice of image-craft. The act of producing a painting presumes that a single image is worth ruminating on for an extended period of time, both for the creator and for the viewer, and this is as true in the hyperkinetic digital age as it was in the classical era. Perhaps the endeavor is even more significant now, as our ambient cultural environment generally discourages stillness and contemplation. My hope is that these aesthetic values will continue to be culturally relevant to some degree in the times to come, prevailing through interludes both benevolent and barren.

Q: As an artist, what do you feel indicates success? Is it financial, or a good review, the inclusion in exhibitions, a solo show, publication? Does the bar continue to rise? Or do you feel that success is more internal, a confidence in your craft, a degree of self-satisfaction?

A: Success is highly subjective, even for those not engaged with the Arts. It’s ultimately up to the individual to establish for themselves what constitutes a rewarding career. In my case, the definition comes down to the most pragmatic questions of sustainability; the mundane routines of daily life, and the means to devote the necessary time, energy and resources to produce what I consider to be quality work. If all those elements are harmonized and operating with efficiency, success has been attained, the verification comes from the opportunity to produce.

Q: What advice do you have for young artists just starting out?

A: Consider the long view, whatever one’s creative discipline, whether painting, photography, music, dance, digital media, or whatever one feels passionate about. Once one has experimented sufficiently to develop a somewhat predictable method of productivity, endeavor to create a life structure that can support this over a long period of time. Prioritizing the creative process over other aspects of life is challenging, and may require various sorts of sacrifices, but it will be necessary if the intention is to keep working. This can mean almost anything in practice, which is why I’m dubious of formulaic recipes for universal success. What yields good results for one may be disastrous for another. The important thing is to invest whatever it takes to understand one’s own creative process, and to build a manageable lifestyle that can support one’s endeavors.

Of possible interest to the Readers is the short prose I wrote regarding the genesis of the Arcadia Image:

EVEN IN ARCADIA, there am I. So reads the memorial inscription on a crumbling tomb, inadvertently discovered by shepherds in a beguiling grove, amidst the idyllic rural landscape. An enigmatic pall descends, darkening the luster of the enchanted wood. Who erected this archaic monument, and whose corporal shell is interred within? The poets of ancient Rome pondered this query in brooding prose, rendered eloquent by Virgil in his Eclogues, wherein the pastoral utopia of the great god Pan is tempered by cognizance of the ephemeral nature of all things. The enigmatic maxim engraved on the tomb can be thus interpreted as a Memento mori ; Even in the glorious realm of Arcadia, Death walks uninhibited along the sun dappled path. The poetic hero, so named Daphnis by Virgil in this epic, must also inevitably fall.

The theme has captured the imagination of visual artists for centuries, and was first boldly resurrected from roman antiquity by the Italian Baroque painter Guercino, who opted to depict a grim confrontation between the roaming Shepherds and prescience of their own inevitable fate, in the form of a leering death’s head atop a barren slab. Sometime later, in 1638, the theme was elaborated on and refined with exquisite subtlety by the french artist Nicolas Poussin. In his luminous composition, Poussin removed all the blatant emblems of mortification, instead emphasizing the pensive bewilderment of the shepherds as they struggle to interpret the timeless mystery, which recedes like a dream into the bucolic landscape. The unique presence of the work is so distinctive, the apprehension of the congregation so palpable, that it has served as the template for visual treatment ever since. Dozens of engravers, painters, and even authors, have elaborated on the iconic gathering of the ruminating shepherds, lost in an uncertain utopia, confronted by an ominous riddle.

In this tradition of disquietude, I have attempted to bring the rich legacy of the theme into form for the contemporary epoch. In my version, originally rendered in pen and ink on paper, the Shepherdess has strayed from the company her peers, and finds the tomb in solitude, her hoofed charges and the birds of the forest the only living witnesses to her grim discovery. Sentinels from forgone aeons both glorious and decadent watch impassively from the crumbling stone in which they are immortalized. The past and the future converge under the living foliage, unraveling tension between the rich earth and the limitless heavens. The bemused Shepherdess herself is fearless in her query, the fire of her curiosity perhaps brighter than the opaque depths of the eternal question

This article originally accompanied the cover illustration for Fiddler’s Green Magazine, Issue 7, Gods of the Afternoon. 2020. Edited by Clint Marsh.