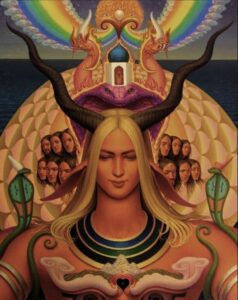 A: My father died very suddenly when I was still a teenager. I left school. I felt so sad that I started to use spiritual practices to see him again. I ended up having visions – they were like dreams but far more real. I saw things or rather experienced things similar to the prophetic visions described in the bible, or in William Blake’s illustrations. This was a daily occurrence for more than a year and then stopped abruptly. The visions affected me deeply but I didn’t feel compelled to directly represent them in Art. Rather, I wanted the act of painting to be like the visionary state. I taught myself to paint and eventually the process of work itself became the inspiration. It was, is, quite natural. Art is like the throat of a person, the vital breath passes through and the voice is comes out, capable of huge varieties of expression. The speech carries from one person to another- wind through trees. To paint is to walk with the wind and then to ﬂy
with it and, ﬁnally, to become the wind.

Q: What do you look for in a model or muse? What qualities are a must?

A: I think the muse chooses the artist rather than the other way around. It is up to the artist to accept the honor of Her attention. Maybe this is a secret that should be left unsaid or maybe I am wrong about it. If I’m right it might not be such an happy arrangement— She disrupts the life of the ego and brings along the special sort of pain that artists are known to experience. Maybe it’s neither such an easy role for Her human vessel…

To say a bit more about it: In my experience there is a strong element of erotic appeal but the other forms of Love must also be present! Love is the key factor; Love is naturally connected to the principal called Beauty- something which can be felt and experienced but never fully understood. The heart— the organ of the body that knows Love and Beauty— is also a mind. Maybe it is the greatest mind, the mind that knows the most. The muse is Love in human form, the living symbol of the heart, alive with the irreducible mysteries that are it’s lifeblood. I say “it” is a “She” because to me it is a speciﬁc person who is incomprehensible, uncontrollable, inimitable and irreplaceable.

A: Both and all. Any single work seems to grow in a sort of fractal process. Starting perhaps with a cluster of sensations, feelings and ideas.The gathering of ideas needs no reason but must have a certain feeling- like a chance meeting that seems ordained by fate. Paintings accrue matter from the inner and outer environment (which are really one and the same) and accumulate complexity and richness. All of this settles naturally into an integrated structure. As with a person, in time it becomes itself. 5. Is there any Artist, living or dead who has inspired you to be more passionate as an artist?

Q: Really there are so many… The question rightly recognizes the importance of passion. Human beings have feelings, passions. We are supposed to have them, yes?

A:When I ﬁrst started painting, Dali was a major inspiration for me- I don’t know why exactly. I think his commitment was deep. Underneath the pompous bravado and histrionics (which I also enjoyed) he obviously loved Art completely and was humble before It (so to speak). Also, he was someone who embraced the modern world without rejecting the past. Balthus was like that too. Both of them had a kind of simple faith in Art that I continue to admire. Maybe this is not the same as passion but I think it is also important.

Q: Do you need to have the right environment or setting to create a powerful image? If so, what preparations do you make to prepare the surroundings you work in?

A: I certainly want the right environment but don’t need it- most of the last ten years I’ve not had a studio and the last year and a half I’ve had no home. It has been quite difﬁcult but honestly, what matters is that the work continues regardless of conditions. Even when the air is imperfect one must keep breathing. Art is life- it never stops. Just as energy is never destroyed. All that said, it is certainly hope to have a studio again (and a home). Natural light is important- I don’t like using artiﬁcial light- colors don’t look right and the excess of light can make a painting too rude. So I guess I should say that I require a window or I must otherwise work outside.

Q: Due to the pandemic, and recent political upheaval (in some countries) there seems to be a need for a new perspective. A New Beginning, Rebirth, A Clean Slate, The Advent of Something Better…. Do you feel it is the artists duty to inspire change? If so in what way do you hope to make a difference in your community or the world at large?

Q: As an artist, what do you feel indicates success? Is it financial, or a good review, the inclusion in exhibitions, a solo show, publication? Does the bar continue to rise? Or do you feel that success is more internal, a confidence in your craft, a degree of self-satisfaction?

A: Curiously, I ﬁnd the truest signs of success tend to come from well outside the province of work. As an example, a friend and mentor helped me ﬁle my tax forms this year. I was facing some new complexities and he said to me, “Welcome to the middle class”. He was not entirely joking and I was dumbstruck.

Q: Do you have formal training?
A. If so, what institution did you attend? Do you feel having a degree has helped you be more successful? Did you make any lasting connections at school or find that attending formal institution gave you any advantages you might not have had otherwise?
B. If you are self-taught, do you feel that the lack of formal training has hindered you in any way? Did you find any road blocks due to a lack of a degree? Do you feel there were advantages by not having a formal teacher, such as a unique perspective without other influences?

A: I have almost no formal training and of course this comes with both beneﬁts and drawbacks. I think I’ve enjoyed some unusual freedom from social strictures but have probably suffered more isolation and more alienation than the average person, or the average artist come to think of it. Many professional opportunities are of course
unavailable to a person with no ofﬁcial status- no paperwork. Of course in the end the important thing is the work rather than the artist. I think it may be that the outsider has a special potential to produce work of exceptional depth.

Q: If you had the power to change the world, to create a new beginning, what would it be, what would you change?

A: I think that all human beings have enormous potential but also a tragic tendency to fall far short thereof. I would change that if I could.

Q: What advice do you have for young artists just starting out?

A: Do everything you can and don’t give up.

Q: Do you feel that the community: local, state or government needs to be more supportive of the arts? If so, in what way?

A: I have become deeply confused about what government actually is. Community has become very confusing too. Frankly I am so habituated to disaffection that I can’t
answer this question either properly or fairly. Religious institutions and Royal courts have a proven record of nurturing the production of truly wonderful art. I doubt that governmental institutions are capable of the like but I hope to be shown wrong. I have certainly heard that the age of Art is over but I don’t believe it. People still don’ know what Art is. I think they may know less than ever and that is sort of lovely.

Q: Have you had the opportunity to benefit from grants or commissions funded by the state or government or private institutions? If so, can you share your experiences?

A: I have not obtained grants or commissions from any public or private institution. I think I have only once made it past the ﬁrst cut when it comes to that sort of thing. I don’t like or understand politics but years ago I heard words I thought exceedingly wise from Hillary Clinton. She said something like, “I no longer speculate about the motives of other people”. 14. If you could have a conversation with anyone from our past, any era, who would it be and why?

Q: If I could have two I would want to talk with both Confucius and Lao Tze. If I really have to chose just one it would be either Aspasia or Diotima- hard to choose but I think either would do. I will add, one relevant inquiry for you, maybe you could share with us your connection or interest in the spiritual imagery you create, and the inﬂuences from Native America, Mexico, India, and Celtic traditions?

A I spent a lot of my childhood by a bay on the Atlantic coast. I remember my grandmother talking about how she used to look across that bay at night and see no
electric lights. The time that passed between her childhood and mine was short but played stage to immense changes. The world is always changing of course but there
are also things that pass quite unchanged from century to century and from one civilization to another. This process is evident over thousands of years. There is some common, universal language in culture- in Art. It seems to have no regard for the limiting factors of history and geography. There are correspondences that can’t be explained by psychological theories or historical models- at least not to my satisfaction. This ignites my mind. Art is a tidal bay into which I have poured myself and then scooped out some new mixture- I don’t worry which water is mine and which is the ocean. This answer of mine lacks the speciﬁcity of the question but I hope it will serve.